The kingdoms of antiquity

Sudan was already playing a role in world history as early as the first millennium BC. References to Kush are well known in Egyptian inscriptions and also in the works of Greek and Roman authors as well as in the bible. Despite the originality of the Kushite civilization, scholars have tended to see its achievements as wholly due to outside influences, even from areas as far away as India. This reflects a deep-seated prejudice, common until recently, about the ability of the African continent to nurture an indigenous civilization, an attitude that has been debunked by recent research. It would also be mistaken, in the final analysis, to view Kush merely as an Egyptian satellite, although it is true that the initial Egyptian conquest of the northern Sudan, during the time of the Middle Kingdom (c. 200 BC) had a profound effect upon Sudanese life and inspired the beginnings of indigenous development. The relationship between Kush and Egypt was much more of a two-way exchange; for a period of time the whole of Egypt came under the rule of the Napatan kings, and there are certainly aspects of the Egyptian culture which derive from Sudanese African traditions. 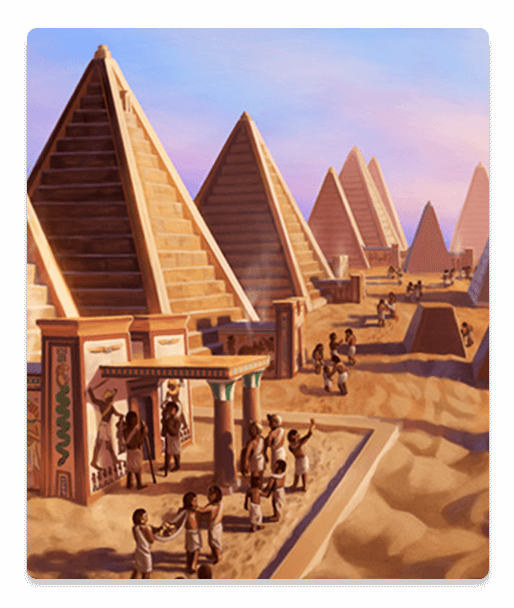 The modern historian is unfortunately forced to look at Kush through foreign historical references, and it seems reasonable that he should attempt to identify specifically non-Egyptian elements at Meroe and at Napata. Around 590 BC, the Kushan capital was moved to Meroe, a move which has stimulated the development of indigenous elements in the Kush culture. Inscriptions in the Meroitic language and alphabet became more common after this date, and in the sphere of arts and crafts the earlier Egyptian influence became subordinate to a forceful and unique style. Pottery, perhaps the most easily studied archaeological medium, displays distinctly African characteristics. Further examples of specifically African or Sudanese traditions which are attested at Meroe by ancient authors can also be found; matrilineal succession and the importance of female positions – for example, Candace, or queen mother. So is religion, which is another area where we are able to identify a Kushite tradition which has no parallels outside the Sudan.

All this is part of an indigenous development which was intertwined with Egyptian institutions without losing its original vitality. Eventually, many of the indigenous elements, which derive from African origins, outlived the Egyptian infrastructure and reappeared, more or less unchanged, at later periods in Sudan’s history. Furthermore, as if to reinforce the distance between the Kushan realm and Egypt, the downfall of the Kushan kingdom came about not from the north, but from the south, from African Ethiopia, another neighbor which has played traditionally an important role in Sudanese history. In around 330 AD, the downfall of the Kush civilization occurred at the hands of King Ezana of Aksum, whose invading armies Ethiopianized the country; a language ancestral to present day Nubian was first introduced, and pottery styles became distinctly more African than Mediterranean. The Kushan period is instructive, if only because it serves as a reminder to those whose own cultural and historical perspectives have remained trammeled along racial or religious lines, that the Sudan as a country is capable of generating its won specific characteristics, acquired from both the north and the south, and analysis furthered by reference to subsequent periods in Sudanese history.